Behind the Scenes: Ode to Joy 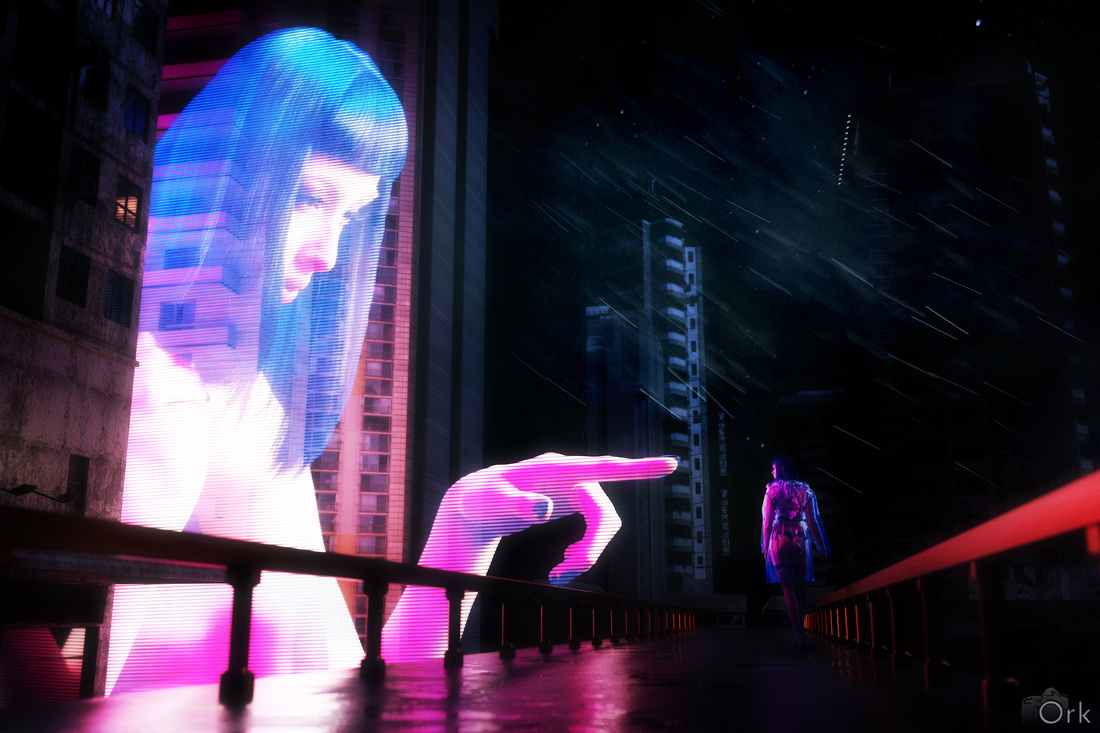 Ode to JoiI had the idea for this image for a while now, but really just didn't know how to proceed... my early attempts just weren't. So, I started learning. Following tutorials. Reading up on techniques. Looking at amazing art by others... Everything!

Now, one year later, it feels like I am really on the edge of a whole new world of creating. This type of world-building is extremely fun for me, and I am so not done yet!! :D

This image is my take on a single scene from Blade Runner 2049, where a more than life sized hologram interacts with the real world. I've captured both photos with the lighting conditions of the end-result in mind, and meshed these within a virtual 3D world. In retrostpect, I would have again done things differently, but that's learning. For now, I just didn't want to not-show this! :) On towards new projects!

Model: the extremely patient @nathalyblue - thank you for giving me the time to finish this Amazing city prefab parts are from #kitbash3d (and I am definitely participating in the cyberpunk #kb3dcontest ) Rendered in an hour using #blender 2.8 with #cycles ( though I did a lot of pre-renders with #eevee first)

Two years ago I started to learn 3D modelling.. and I still can't do that. ;)

In the meantime, I did however manage to create the above image, and I am actually quite proud of the result!

Here's a little behind the scenes.

In March 2018 Nathaly Blue and I got the idea to create an hommage to Blade Runner 2049: a new version of a particular scene in that movie. Cool! We sketched what we needed. I figured out the color scheme and the light setup and we had a great shoot!

Mind you - the "figured out the color scheme" bit is not completely trivial. A 3D/photomontage combination requires planning. What is the light source you're aiming for. Where does it come from? What shape does it have? What colors? For this particular scene we wanted to create a bigger than life version of a hologram. And since a hologram emits light (in my universe) we could get away with a lot of the nasty details.. I can light it with whatever, as it would then become its own light source in the 3D world!

Cool, easy, what can go wrong. And with that thought in mind, we picked a color scheme that suited the Blade Runner feel the most.

Next up: building the scene. Initially, I thought to do this in 3D, but after a few attempts I had to concede I was't ready for that yet. So, back to photoshop. That worked. We got this! 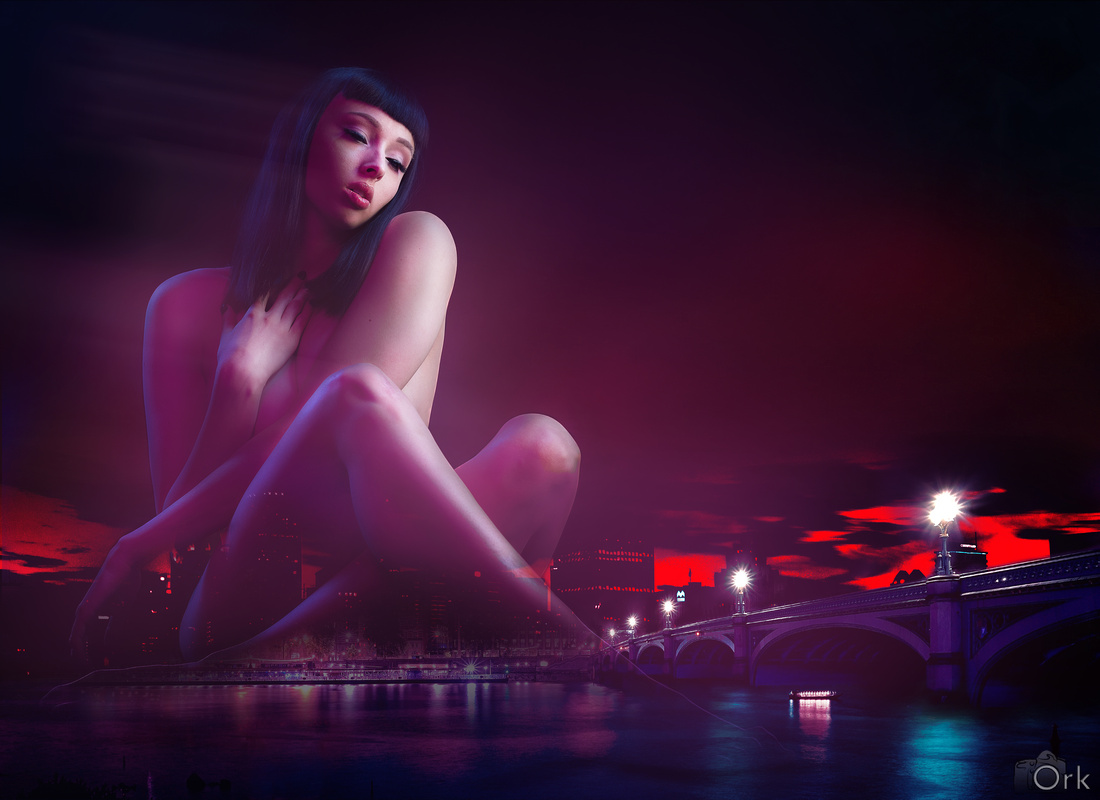 Ode to Joy - as posted a year ago.

But the original idea still haunted me. This wasn't the result I wanted to get.

So I set out to learn Blender - a free opensource modelling and rendering program. Free is awesome, but like any new toolset it comes with a learning curve before you can use it. So I had to learn. A lot. In my previous blog post (from 2017 . . . ) you can read about my first steps. Back then, both my old computer combined with the not so realtime cycles renderinge engine prevented me to truly understand what I was building, and I spent more time waiting than time building. That didn't work for me, and I stopped.

Then came Blender 2.8! Wow! Blender 2.8 is a big milestone release with a new UI, a much faster rendering engine, and it's actually.. easy! It's amazingly fast and (for me) intuitive to use. Combined with these tools and a sponsored free cyberpunk kit from kitbash3d I went to work.

In earlier works I post-processed (read: photoshop) the model on top of a 3D generated scene, but I couldn't easily do that here. The hologram would emit light, and that would cause all sorts of reflections. It needed to be in the scene. As a test, I placed cut-outs from both model images as plane meshes in my 3D scene and set them up as emission shaders. That worked wonders! Reflections suddenly started appearing correct-ish, and I got the first feel that this image was going somewhere! At the end, the only thing left was building the bridge itself. And to be honest, that is where I could still improve the most on - in its current form it's still a bit.. simple.

During this process, the new Eevee rendering engine really allowed me to work fast. Real time visualziation of results that are almost good enough, wow! To compare, here's an early render in both:

Not bad right? Both could be useful in a pinch. To compare:

So what do I use? Both. Eevee is absolutely perfect for seeing where I am at during building. When it's done, I set cycles up for a longer render and I fire up photoshop afterwards.

I took the above Cycles result to do a first draft photoshop test to see what I need to do to get to the actual image. I quickly added some atmosphere and rain to see if the end result looked like what I wanted. 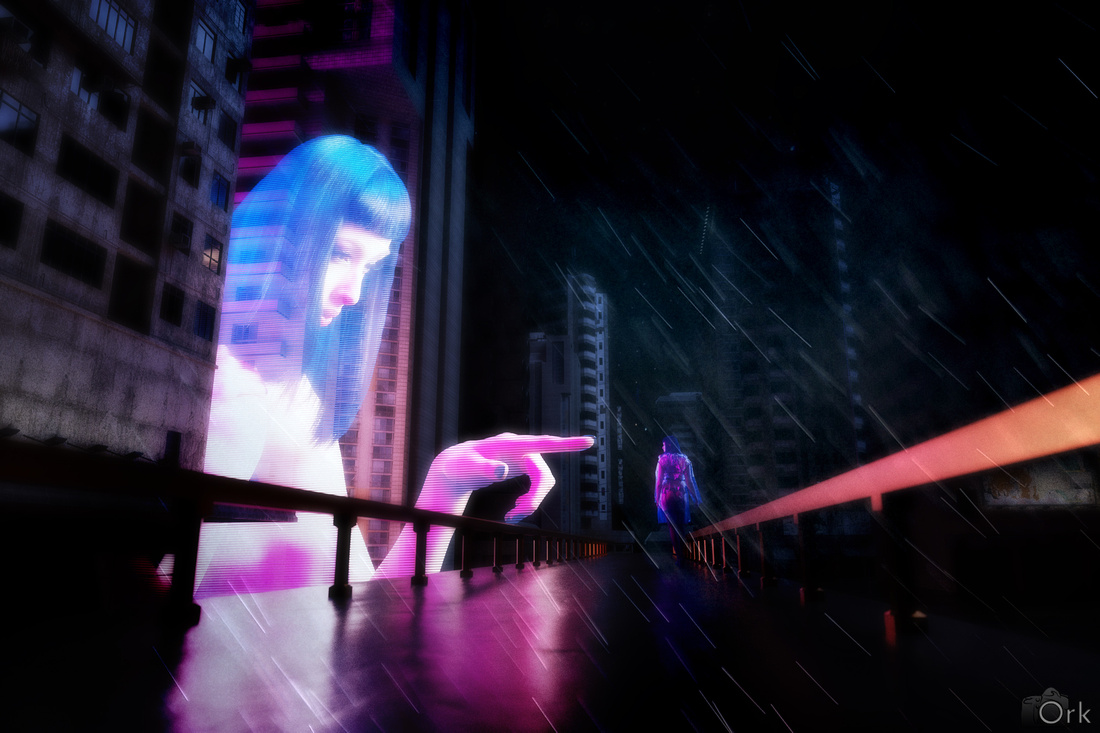 Nope! Not yet. For one thing. The road didn't have splatters of water on it from the fake rain, and second, it's all a bit far away isn't it? So I changed both in 3D, and then re-did all the photoshop work. And that's how the final image (topmost in this post) came to be.

Thank you for reading!

But what, where are the behind the scenes?

Okay, here they are! 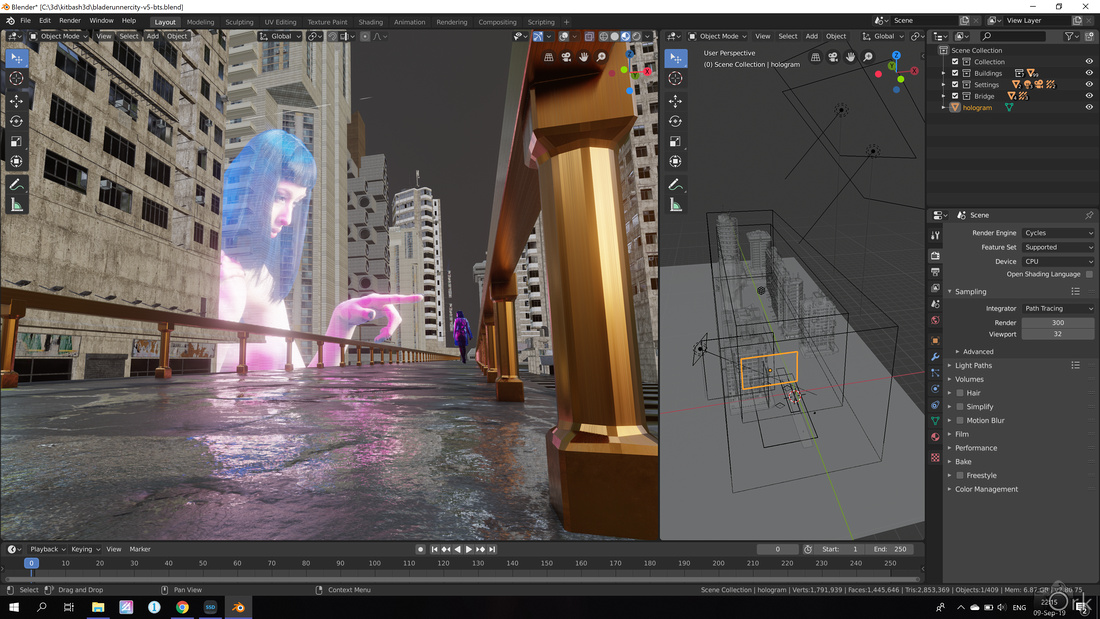 Here's the Blender 2.8 UI working on the final image. The view on the left shows me roughly what I am doing, though without the full rendered lights. Blender allows me to quickly grab-and-drag stuff I want to have elsewhere, so this view helps me out a lot. The view on the right gives me a quick overview to see how everything is now organized spatially. 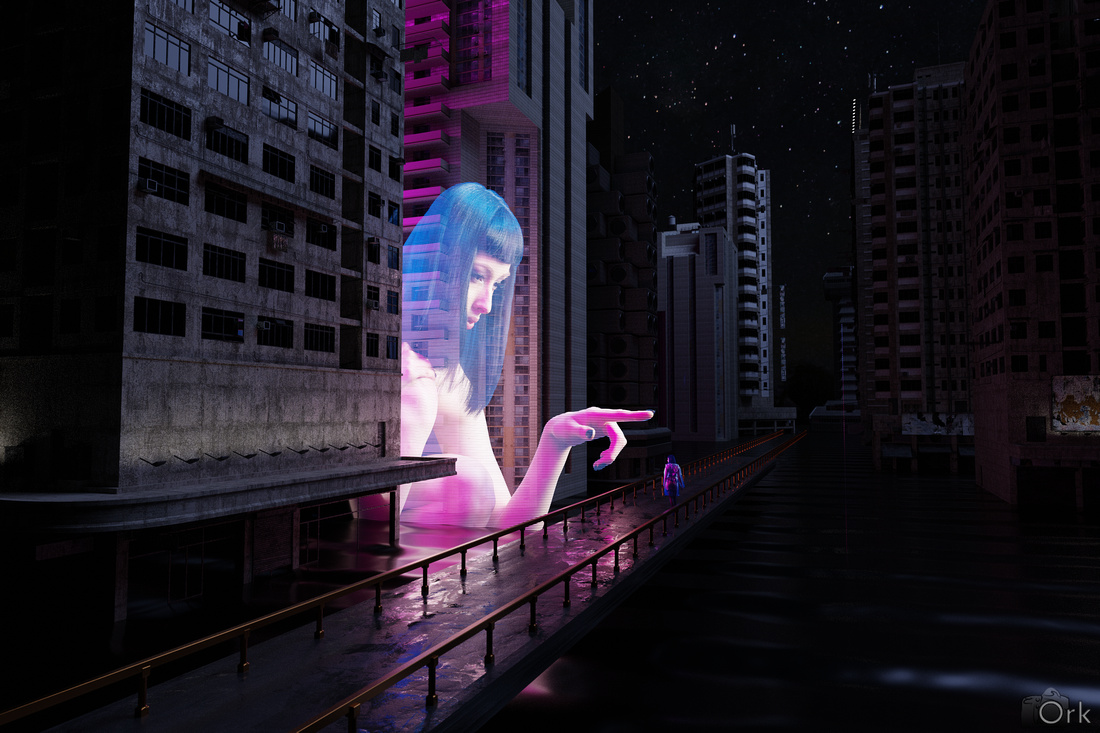 Here's the final result again, without the photoshop layers (no rain) and taken from a different perspective. Because the models are already in the scene I could do rapid recompositions to test out various viewpoints. 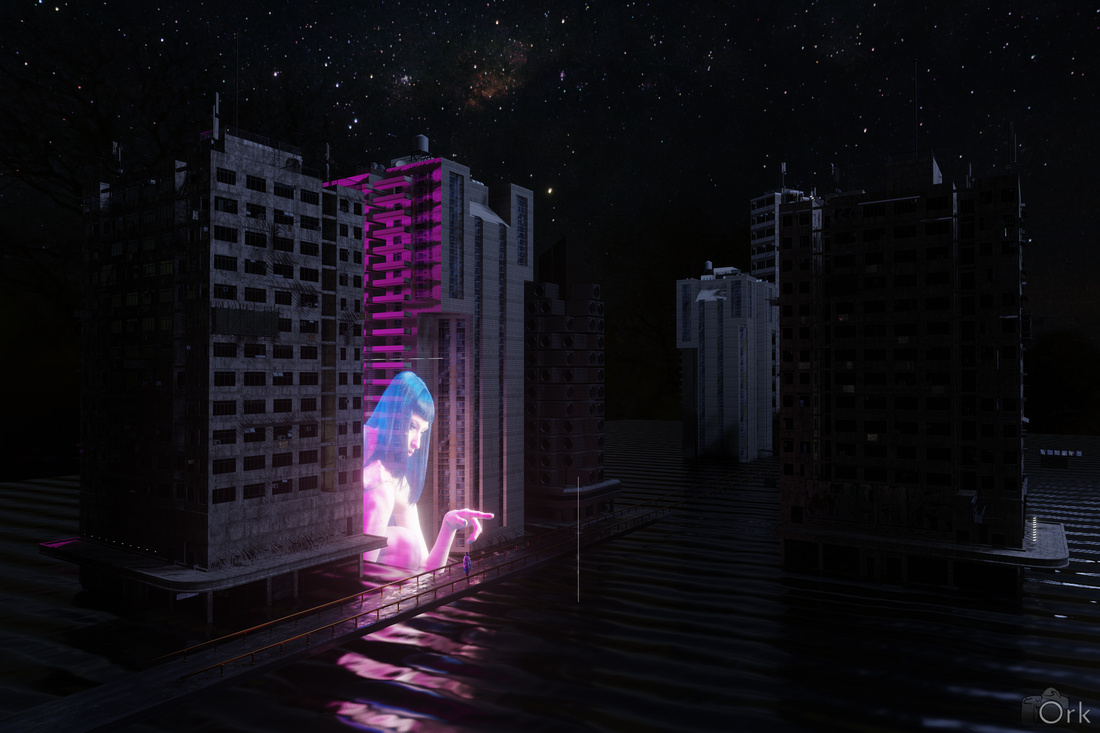 And here is the same scene - rendered in Eevee for speed. Here the perspective really starts to break. The whole image only works when it's set in the perspective I intended it to work in... anything else makes it amazingly fake and empty.